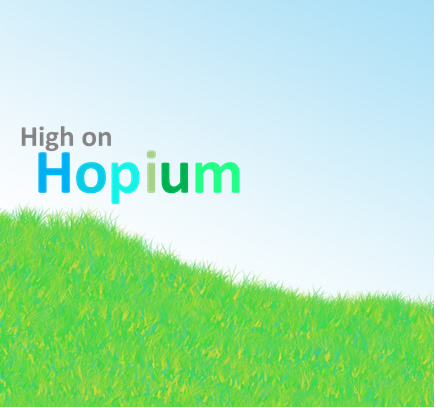 If you thought the 2008 financial crisis signaled the end of “irrational exuberance”, the overly optimistic, almost blind approach to managing markets (and a signature phrase attributed to former US Federal Reserve Chairman Alan Greenspan), think again. We are currently high on hopium, a blended word defined as “irrational or unwarranted optimism” by Yourdictionary.com and as “an addiction to false hopes” by Urban Dictionary.

The word “hope” itself comprises a kernel of reality since what it espouses may one day come true. But the notion that it can teeter on the brink of the irrational led to combining it with “opium”, the addictive drug that relieves pain, produces sleep and can have a tranquilizing or even stupefying effect. As with many blended words, hopium has been invented and used before major dictionaries have added it to their lists, as searches on Oxford Dictionaries and Merriam-Webster Dictionary online attest.

Hopium has gained traction particularly in the financial industry, a sector known for its blended vocabulary (“fintech” and “cryptocurrency” come to mind). In The Wall Street Journal‘s Week in Words column “What Are You Smoking?” (29 October 2011), author Erin McKean cites hopium as a phrase coined by financial market analysts to describe the motor behind advances in the markets and recalls a quote from the play “Measure For Measure”, in which Shakespeare writes “The miserable have no other medicine but only hope.” Hopium can stand for the illusion some traders have of holding on to underperforming equities in the hope they will recover to at least their original price. In his Seeking Alpha blog post “Hopium Floats, And That’s How The Market Got High On Friday” of 13 May 2019, David Haggith writes: “[American politician and former businessman] David Stockman calls this hopium. The market rises on any whisper hope, regardless of whether it has any firm basis. It rises because people are determined the game will go, the roulette wheel will continue to spin, the pretty lights will keep flashing, and the clamor of the crowd will grow into a roar because everyone wants it to. Reality becomes the sideshow to the sideshow.”

Who can deny this interesting view of reality, reinforced by current events and adeptly packaged in hopium? Yet, some may wonder what blended words truly mean for language: do they signal a dumbing-down of how we discover new words, relying on the easy skill many of us learned when we were taught to read of separating out letter and sound patterns, rather than depending on scholarly discoveries? Or are they simply clever uses of what we have available? Take “guesstimate”. The word sounds sloppy, but at least it reveals that a particular estimate is based on guesswork rather than on facts and figures. And it’s consistent with the view that language is a compilation of phrases and words that people use, and not just terms that higher linguistic authorities prescribe.

Oxford Dictionary regularly conveys nascent terms that it monitors for possible incorporation into its corpus of 21st-century English. Hopium will likely have its day – all irrational exuberance aside.