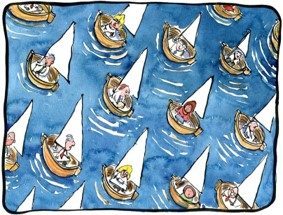 By many measures, US presidential candidate Donald Trump may have to concede that his once rising tide of popularity is now falling to the point of affecting other politicians in his party. The headline in The New York Times, “Republicans Worry a Falling Donald Trump Will Lower All Boats” (18 August 2016), made an indirect reference to the aphorism, “a rising tide carries all ships higher”, that would have characterized the Trump campaign just weeks ago.

That this phrase works powerfully in either direction bears notice. While a rising tide ensures a generally rosy state of affairs for all concerned, a falling tide carries all objects down with it, revealing debris we often don’t see. Both tides are homes for the living, with sea life filling the tides that rise and bottom-dwelling critters like crabs making ground when the tides have gone out. Both are testaments to the pull of forces that beguile us humans.

Based in science, tides are nevertheless magical and disquieting – they package predictable results, but are moved by forces we can’t see or control. In that way, are they a strong symbol for both earlier times and today? While the symbolism has religious origins, it has stealthily permeated economic and other subject areas for over a hundred years. In the 1960s, US President John F. Kennedy gave the term its modern halo by using “a rising tide lifts all the boats” to describe the almost domino effect of macroeconomics in a 1963 speech commemorating the opening of Arkansas’ Greers Ferry dam: “[Arkansas] had about 200,000 cars in 1929. It has a million cars now. They weren’t built in this State. They were built in Detroit. As this State’s income rises, so does the income of Michigan. As the income of Michigan rises, so does the income of the United States. A rising tide lifts all the boats and as Arkansas becomes more prosperous so does the United States …”

The phrase had earlier piqued the interest of Theodore Sorensen, Kennedy’s speechwriter, who had seen it used by the New England Council, the regional chamber of commerce, in its slogan, “The Rising Tide Lifts All the Boats”. By the 2000s, it even permeated arguments for solving much greater issues. According to Rodrigo de Rato, Managing Director of the International Monetary Fund, in a 2006 speech cited on the Fund’s website, “the key [for Europe to solve its problems] is the pursuit of policies that will raise growth. Growth is the tide that lifts all boats”. And in a debate this year among US Republican presidential candidates, Ohio’s Governor John Kasich referred to the American system as having given opportunity to everyone and cited Jack Kemp, US Secretary of Housing and Urban Development (1989-1993), who used the expression “a rising tide lifts all boats”. Perhaps it’s fitting, though, that the lofty assertions of election-year politics are brought down to earth by fact-checking and mudslinging – the highs and lows of such tidal flows. Depending on our beliefs and motivation, we may decide to give in and go with the tide, or drift or swim with it (to move along with outside forces). Or we may try to fight it, and swim against the tide. However, if all the boats are truly dropping, someone or something will need to turn the tide. That may be too tall an order – like promising the moon. And who today, besides the moon, can stop the tides from rising and falling?