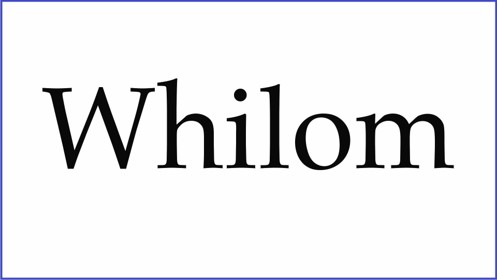 Our wonderful words series highlights odd and marvelous terms that may not be well known or are little used. The adjective whilom means “former”, “erstwhile”, “in the past”. Other synonyms include: late, old, once, onetime, other, past, sometime. Wordsmith Michael Quinion uncovers two other unusual terms with the same meaning: quondam and umquhile (also spelled umwhile).

Here’s one example of the word’s use. In Heavy Weather, the 1933 novel, P. G. Wodehouse wrote:

“His might have been, as his whilom playmate, the Hon. Galahad Threepwood, had made so abundantly clear …, a frivolous youth, but in his late fifties he was taking life extremely seriously.”

According to Merriam-Webster, “Whilom shares an ancestor with the word while. Both trace back to the Old English word hwil, meaning ‘time’ or ‘while.’ In Old English hwilum was an adverb meaning ‘at times.’ This use passed into Middle English (with a variety of spellings, one of which was whilom), and in the 12th century the word acquired the meaning ‘formerly.’ The adverb’s usage dwindled toward the end of the 19th century, and it has since been labeled archaic. The adjective first appeared on the scene in the 15th century, with the now-obsolete meaning ‘deceased,’ and by the 19th century it was being used with the meaning ‘former.’ It’s a relatively uncommon word, but it does see occasional use.”

So can whilom today be considered a whilom word?