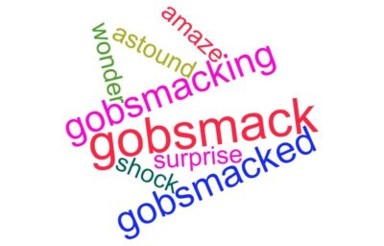 What’s a “gobsmacking” news conference like? That unusual word was chosen by The New York Times in its editorial of 17 July, “Why Won’t Donald Trump Speak for America?”, to describe the presser held by US President Donald Trump and Russian President Vladimir Putin in Helsinki, Finland.

The verb “gobsmack” means “to amaze, astound”, while the adjective “gobsmacking” connotes “utterly astonishing; astounding”. And astonishing, too, is that according to Oxford Dictionaries, the term originated only in the 1980s, in the British weekly music magazine Melody Maker as a combination of “gob” (an informal term for “mouth”) + “smack”, a “sharp slap or blow”, a “loud sound” or “boastful or insulting language especially between opponents”.

Examples of sentences containing the word include:

“Wandering round the school, I was absolutely gobsmacked at the care that had been taken to get all the props and period details right.” Times, Sunday Times (2009)

“He was gobsmacked when he heard of the redundancies.” sentencedict.com (2016)

“The gobsmacking inequity goes well beyond capital cases, of course. In 2014, USA Today found that at least 70 police departments across the country were 10 times more likely to arrest black Americans than anyone else.” The Week magazine (2016)

“People from other countries are gobsmacked by the food that British children eat.” Collins English Dictionary (online, 2018)

“If something leaves you so shocked that you are absolutely speechless, you can consider yourself gobsmacked.” wordsinasentence.com (2018) By now you get the picture. In that news conference on 16 July, President Trump said he accepted President Putin’s denial that Russia had interfered in the 2016 US election. In reaction, both the Russian press and US politicians pointed out that that position equated to the US President expressing a lack of trust in his own intelligence agencies, which had concluded that Russian meddling had indeed taken place. Mr. Trump later retracted his statement, stating that he meant to say, “I don’t see any reason why I wouldn’t or why it wouldn’t be Russia. Sort of a double negative.”

Would “jaw-dropping” have sufficed to describe the press conference? Not quite: gobsmacking, it’s hard to argue, is richer in visual imagery – a wonderful word.