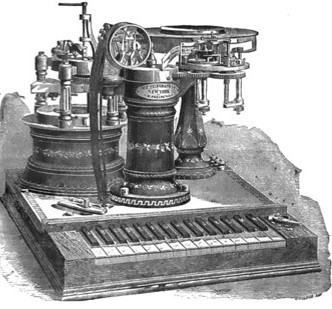 Transferring words from one word class to another – called “conversion” – is just one of 13 ways to create new terms in English, according to The Guardian (“How new words are born”, 4 February 2016). Making nouns into verbs, for example, puts spunk into the language and can even add nuances to the meaning. When you sprinkle pepper [noun] on your food, you logically also pepper [verb] it. But that’s not all: if you’re curious about the recipe, you can pepper the cook with questions.

Inventions are rich examples of this creative process. Just when you expect dated innovations to become old and dusty and be relegated to the word dumpster (does anyone refer to a “tape recorder” anymore?), some live on as strong verbs. Take an apparatus many people know only from museums: the telegraph. While it revolutionized communication through coded signals and electric transmission over wires, it’s symbolic of all that is dead and buried thanks to rapid technological change. In fact, Merriam Webster Dictionary cites the 21 December 2017 edition of Glamour in which: “Former New York City Mayor Michael Bloomberg likened reviving the coal industry to resurrecting the telegraph industry.”

However, the verb needs no dusting off. Perhaps the invention’s ability to transmit messages via code contributed to the verb’s evolved meaning: to “make known by signs, especially unknowingly and in advance”. Oxford Dictionaries’ definition is to “convey an intentional or unconscious message, especially with facial expression or body language”. Indeed, “telegraph” is as much about words as the lack of them; just the look on a face can telegraph bad news. The verb was linked early on to boxing; some fighters signalled their next moves so obviously that their opponents could easily counter them (“He lost the boxing match because he was telegraphing his punches”).

Fast-forward to the infamous “Nunes memo” of February 2018 that outlined purported bias during the investigation into possible foreign meddling in the US presidential election. The House of Representative’s Intelligence Committee had to address how to make the document public. “Exactly how and when that would happen was not immediately clear. Republicans were relying on a never-before-used House rule and did not telegraph their plans,” according to The New York Times (“Trump Clears Way for Secret Memo’s Release”, 1 February 2018).

Other age-old inventions live on as verbs. The Romans used cement, a powdery substance made by heating lime and clay, as the base of concrete. A Middle English word, “cement” originated from the French cimenter and the Latin caementum (“quarry stone”) and caedere (to “hew”). The solid substance served equally well as a verb, as in to “settle or establish firmly”. Parties can feel confident when “cementing an agreement”.

The torpedo got its name from a fish, the electric ray (Torpediniformes), and the Latin word torpere (to “be stiff or numb”), and was first used in the late 18th century to signify an explosive device that detonated in water. It then became the name of Robert Fulton’s towed gunpowder charge tested in 1800 for sinking ships, and finally the moniker of Robert Whitehead’s self-propelled device invented in 1866. And yet, while a submarine may torpedo a boat, we can also “destroy or ruin (a plan or project)”, as in “The board torpedoed the TV network’s proposed sitcom by throwing out the budget.”

Even modest inventions have yielded verbal fruit. Production advances led to replacing seals and wax with the rubber stamp to validate documents. But the stamps have begun collecting dust amid the 21st-century’s e-signatures, much as telegraphs did in the late 1800s with the introduction of the telephone. Rest assured, though, that just as “telegraphing one’s intentions” invariably lives on, “rubber-stamping decisions” is a habit too engrained to fade away.