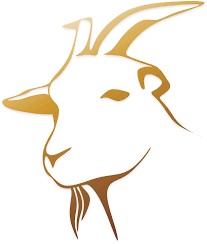 Not only the name of a hardy, domesticated ruminant mammal, “goat” is also a label for negatives: if you miss the penalty kick, you’re the goat (the person blamed for a loss or failure); an old goat (old man) doesn’t adapt to modernity; choosing sides in kickball often separates the sheep from the goats (distinguishes those better at a skill than the rest of the pack); and some people, in unfortunate circumstances, become scapegoats (those who bear the blame for others).

So what about the acronym GOAT? It sounds the same but means quite the opposite: “greatest of all time”. Spelling it out lessens the shock, for instance when associated with tennis great Roger Federer:

Yet, sometimes it’s assumed the reader already knows the meaning, as in this example: So how did goat become GOAT? According to Grammarphobia (www.grammarphobia.com): “The earliest example we could find for ‘G.O.A.T.’ used to mean ‘greatest of all time’ is from September 1992, when Lonnie Ali, [boxer] Muhammad Ali’s wife, incorporated Greatest of All Time, Inc. (G.O.A.T. Inc.) to consolidate and license her husband’s intellectual properties for commercial purposes … Ali often referred to himself as ‘the greatest’ and sometimes as ‘the greatest of all time’. … The earliest example we could find for the term used as an acronym is an album by the American rapper LL Cool J entitled ‘G.O.A.T. (Greatest Of All Time),’ released on Sept. 12, 2000.”

In view of this about-face, the abbreviation could well become a “did you know” etymological story. Another two curious uses of the word can be referenced from the past.

According to Dictionary.com, “to get someone’s goat”, which means to annoy someone, dates from 1910 and perhaps derives from stealing a racehorse’s mascot. Owners placed goats with their thoroughbreds to keep them calm before a race (indeed, seeing a massive horse in a stable with a tiny goat close by is a rare glimpse of true companionship). Those who wanted to fix races would seize the goat and thus get the owner’s goat, to unsettle the horse and cause it to perform poorly.

The other example is anchored in US Naval Academy tradition. Why has an animal so small and unassuming become linked to a national defence institution? Sailors often kept goats on ships during long voyages to provide food, milk and butter. Legend at the Academy has it that a goat died at sea and was skinned so it could be stuffed onshore and preserved. Back on land, before the young navy officer reached the taxidermist, he stopped to watch a football game at the Academy and at halftime dressed up in the skin. Whether or not that brought good luck, Navy went on to win the match. In 1893, a live goat was brought to the Army-Navy game, and the victorious Navy team adopted it as its mascot. In the early 1900s, the mascot was named “Bill”. By November 2016, having kept the tradition, the Academy had added Bill XXXVII to its mascot ranks.

The moral of the story? GOAT or goat, winner or loser, words can be both strong and endearing.