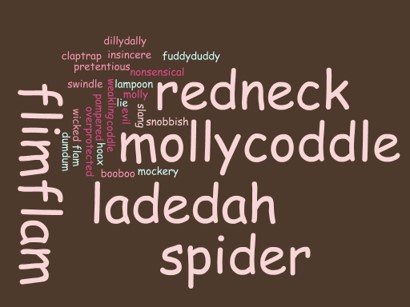 Some of the words defined here were considered “wicked” decades or even centuries ago, but some are still in use. Many seem tame today, but they were once “curses, insults, put-downs, and other formerly unprintable terms” according to Hugh Rawson in his book, Wicked Words. La-de-dah/la-di-da. A refined man, or a pretentious or snobbish way of speaking

Rawson writes that a la-de-dah is “one who is too affected for words, and thus can be described only in terms of otherwise meaningless syllables”. English-language lexicographer, Eric Partridge, an expert in slang, dated the expression to around 1860 and suggested its popularity was due to a lyric in a music-hall song of 1880: “He wears a penny flower in his coat, La-di-da!” (E. Partridge, A Dictionary of Slang and Unconventional English, 1970).

Mollycoddle. A pampered, overprotected weakling, or to pamper or treat someone in an overprotective way

According to the Oxford English Dictionary, the term comes from the first name, Molly, meaning “girl” or “prostitute” and “coddle”, to treat with excessive care or kindness. Rawson points out that US President Theodore Roosevelt used the term to describe those opposed to his Big Stick foreign policy as “the large mollycoddle vote, people who are soft physically and morally” (Theodore Roosevelt, An autobiography, 1913, in Safire’s Political Dictionary, 1978).

In the early 17th century, Moll was the pet form of the proper name, Mary, but the word also meant “wench” or “harlot”.

Redneck. A working-class, white, rural Southerner, who is politically reactionary or a racist

Research shows the term dates back to 1830 in Fayetteville, North Carolina, where it appears to have been used to describe the sunburned neck of fieldworkers. The farm workers there may have had particularly red necks from being exposed to prolonged sunshine, “reinforced by the effects of pellagra, formerly endemic in the South. The lesions produced by this disease, the result of dietary deficiency, are aggravated by sunlight and, in chronic cases, may form a ring that follows the line of the victim’s shirt collar.” The word usually shows a critical or disrespectful attitude, but it is not always derogatory, according to Rawson. It has been used by elected officials to gain favour with certain voters by identifying themselves with redneck values. Jimmy Carter was cited as having used the term during his campaign for Governor of Georgia in 1970, describing himself as a redneck, “a synonym for the traditional racial attitudes of the Deep South” (The New York Times, 15 July 1976). In general, however, the word is used as an attack term, as in: “He basically was a dumb redneck from coastal Carolina, the hick town of Kinston.” Spider. An evil person, in particular one who devises complex plans to trap victims

This meaning of t he word was already used in the 16th century, speaking of Richard III: “Why strew’st thou sugar on that bottled spider Whose deadly web ensnareth thee about?” (William Shakespeare, Richard III, 1592-93).

The term dates to the mid-16th century, and is an example of a linguistic reduplication whereby a part of a word or a whole word is repeated exactly or with a slight change. Many reduplications have pejorative meanings. Rawson cites: boo-boo, claptrap, dilly-dally, dum-dum and fuddy-duddy, among others. One theory is that the word “flimflam” is based on the Old Norse word film, meaning “mockery” or “lampoon”. It brought about the word “flam’ which meant “nonsense in general and a lie or hoax in particular”.