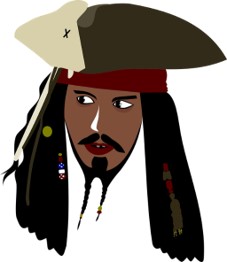 Our Wonderful Words series highlights odd and marvelous terms that may not be well known or are little used. Rogue, villain, scalawag, knave – they’re all synonyms for rapscallion (a mischievous person; a rascal or ne’er-do-well). An archaic word, its origins led to a rich evolution of terms that started with “rascal”. Recorded as early as 1330 and deriving from the Old French rascaille (outcast, rabble), “rascal” was modified in the 17th century with what Oxford Dictionaries calls an “apparently fanciful ending” to form “rascallion”.

That word “didn’t sound quite mischievous enough”, according to the Merriam-Webster Dictionary, and led to the addition of the letter “p” to form rapscallion. The term often carries a humorous quality: think of Robin Hood to some degree, or Captain Jack Sparrow, the fictional character portrayed by Johnny Depp in the Pirates of the Caribbean film series, and you’ll get a sense of what a rapscallion is.

But that’s not the end of this tale. A word similar to rapscallion in spelling, pronunciation and meaning makes the term all the more intriguing. “Rampallion”, according to the blog The virtual linguist, originated in the 16th century and may have derived from to “ramp”, or to “rise on the hind legs” as used in heraldry. It also connoted when people would “gesticulate or behave in a furious or threatening manner”.

By all measures archaic, rapscallion still rears its mischievous head in unlikely circumstances. Its colorful etymology has inspired names for products, groups and businesses: the Rapscallion Seafood House & Bar in Reno, Nevada; RapScallions, a US band from California; the Rapscallions, an antagonistic army in the book The Long Patrol; and Rapscallion Wines of South Africa. Rapscallion Brewery of Fiskdale, Massachusetts even posts an eloquent explanation on its website: “[Rapscallion] appealed to us for its history, its uniqueness and most of all its association with rebelliousness. We’ve always cheered for the underdog, the self-made man and the Robin Hoods of the world, because we believe in living with humility, working hard, and giving back.”